The Kinnison legacy continues with visitors of the Last Hope Ranch and the heart-fluttering romance, humor, and close-knit country hospitality of End of the Line! 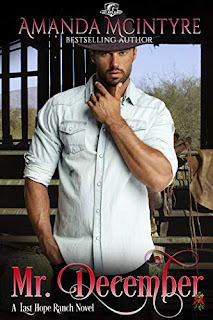 MR. DECEMBER
Newly appointed Sheriff J.C. Nash has more on his plate than investigating a mysterious fire that’s destroyed End of the Line’s beloved library. Olivia Evans, the girl he helped save from criminal mischief charges back in high school even as she crushed his heart is all grown up and back in town. Worse than the sparks that still fly between them is J.C.’s fear that they will ignite a passion he won’t be able to walk away from--like she did to him, all those years ago.
Olivia once believed if she kept moving fast enough, her family’s dark secrets wouldn’t catch up to her. But when she comes back home to End of the Line to care for her ailing mother, she’s forced to face her painful past and face the man—now sheriff—she ran from all those years ago. Unexpectedly, the town and its people begin to creep back into Olivia’s heart, giving her the sense of belonging she’s longed for. But when things start to heat up between her and the sexy sheriff, how can she convince him to trust that she won’t leave again?
AMAZON  *Digital/Print 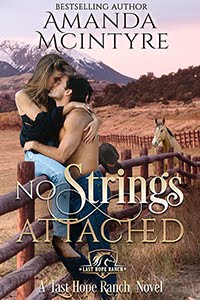 NO STRINGS ATTACHED
Sally Andersen has spent her life teaching school kids and being caretaker for her ailing father. Alone after five years, she sees her friends marry and start families and decides she, too, wants a family…just not in the conventional way.


Serving overseas left Clay Saunders with no leg, PTSD, survivor guilt, more pity than he wants, and no idea about his future. Asked to be a part of a charity bachelor auction by End of the Line’s fiery redheaded music teacher, Clay doesn’t expect the spark the hope of a normal life inside of him at her unusual request…
She wants a baby. NO RULES. NO COMMITMENT. NO STRINGS ATTACHED. 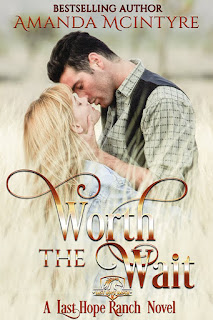 WORTH THE WAIT
Julie and her sons moved to End of the Line after a dangerous encounter with her abusive husband led to a rescue by her brother, Clay and an old friend, Hank. Over time, her relationship with Hank takes a turn and when he unexpectedly proposes, she is forced to face the battle between her heart and her newfound freedom.
Hank hadn’t seen the woman he held a secret crush on in years, but when her brother asks his help in a dangerous hostage stand-off, he is there in a heartbeat, even taking a bullet to protect Julie and her kids. But will these rekindled feelings Hank has be enough to hold against the time that Julie needs to adjust to her new life and, will Hank decide that it’s worth the wait?