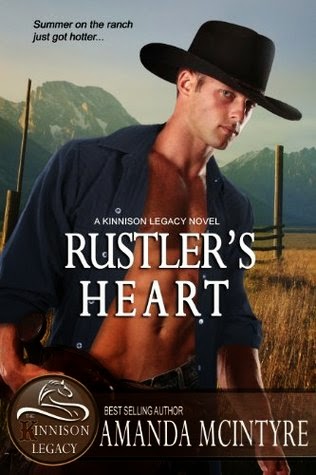 Orphaned by tragedy, Rein Mackenzie was taken in by his benevolent uncle at the Kinnison ranch alongside two others abandoned at a young age. Now, he and his 'brothers' carry on Jed Kinnison's dream of making the ranch a haven for those who need hope. But when a woman arrives claiming to be related to the Kinnisons, she brings danger-not only to his heart, but to those he calls family.

Liberty's presence is a surprise to the family she's never met, and while she yearns to belong, she knows her presence is a reminder of their painful past. Fearless, she dives in, losing her heart to the ranch, to the community, and to an unexpected summer fling.

But when dangers from her past catch up to her, they may cost her everyone and everything she has come to love.

Available for purchase at

“Here let me take that,” he offered and reached for her
duffle.

“Thanks.” She relinquished it to him. He did a double
take when he caught the flash of silver on her tongue.

“Uh, are you hungry?” This young lady was just full of
surprises. “It’s about an hour back to the ranch. We can probably find
someplace that stays open all night.” Preferably, drive-through he thought,
hoping to avoid curious onlookers.

“I’m famished,” she said as she struggled free of her
coat.

Rein dropped her bag in the back of the truck and waited
to assist her into the truck His eyes fell to her backside bent over the front
seat and what was left of her black mini skirt and spandex leggings. She was
plenty tall, given that her legs looked to be a mile long in that outfit. She
stuffed her coat up into the cab and jerked down her black hoody sporting a
Guns & Roses insignia across the back. He caught just a flash of skin above
her waistband, enough to make him feel guilty for wanting to see if she bore
any tattoos. He’d bet money that she had one, if not more. First impression,
she looked like the lead in an R-rated vampire slayer movie.

“Be careful, watch your step.” He gave himself a mental
slap and hurried forward to help her in the cab.

She gingerly grabbed the bar and hauled herself up
gracefully into the seat.

“Did you happen to get my text messages?” he asked.

“Is there someone back home that needs to know you’re
here?”

“No, there isn’t.” She narrowed her gaze on him. “Mr.
Mackenzie, in case you hadn’t noticed, I’m not twelve years old.”

As if he needed to be reminded of the interest she
sparked in him. He brushed it off as her eccentricity.

“Right.” He shut the door, fished for his iPhone, and
frantically texted Wyatt as he walked around to the driver’s side. He wanted to
make damn sure they were awake when they arrived back at the ranch.

“Going to stop for a bite to eat, then head home.” He
paused at the door and rubbed his hand over his mouth, a nervous habit when he
found himself perplexed by something. With a sigh, he climbed into the truck
and busied himself with his seat belt.

“Who were you texting?” she queried.

“Wyatt. Just to let him know you were safe and sound with
me.”

“He was worried? That’s such a big brother thing to do,
how cute.” She grinned. “By the way, my name is Liberty…Liberty Belle.”

Rein glanced at the young woman who looked tough enough
to spit nails. “No last name, or is it Belle?”

Her mascara-laden, coffee-colored eyes met his. She wore
far too much in his opinion. But he had to give her credit, while the overall
effect was a little dark, no…make that a lot dark, it was oddly sexy…on her.
Rein batted away the silly notion. What? Sexy? Where’d that
come from?

“No, Belle is my stage name. I’m Liberty Stenapoulas.”

He considered pursuing the topic of her vocations, but
backed off deciding that it was late, he was too tired and even though she
wasn’t twelve, she was nonetheless Wyatt and Dalton’s baby sister. Even though
she appeared to have walked out of some late night horror flick. He kept his
focus straight ahead and debated the myriad of questions that had popped up in
his brain.

“Hey, are you okay?” She leaned toward him and searched
his face. “Are you sure you know how to get us out of here?”

Rein blinked, snapping out of his reverie. He started up
his truck with a mighty roar and shifted into gear. He knew easily how get them
out of there with no trouble. But more to the point, what kind of trouble was
he bringing home to the Last Hope Ranch?

“I don’t have any issues with your sister, Dal, I just can’t
let her push my buttons.”

He started down the lane.

Rein stopped and looked over his shoulder, the flashlight
illuminated Dalton’s wide smile.

His brother shrugged. “Just sayin.’ Seems like you two spend
an awful lot of time sparrin’ with each other.”

“You’ve had too many beers.” Rein waved away the comment. He
didn't want to think any more about this tonight. He wanted to lose himself in
his work. Do something constructive. Blow off some steam.

“I only had two and I've got eyes, Rein. Not sure what you
think, but I can tell when a woman is interested in a guy.”

He refused to entertain the thought. Not tonight. “I’m going
down to cabin three and do some work.”

“Hey, Rein, for the record. You should stop up to Betty's
and see what she's done with the place. New uniforms, new menu, looks pretty
good. Liberty has quite a talent.”

“You know, you can be as hard-headed as her.”

“Kiss my ass, Dalton. See you in the morning.”

“Sweet dreams, bro. I’ll be up here in civilization, if you
need me.”

He was in no mood to tolerate Dalton’s teasing. Rein trudged
past her cabin, jerking his gaze away when he saw her pass by the window. She
might well be talented in many ways, but the woman was trouble, a free spirit.
She did not intend to stick around and that theoretically should please him,
but it only frustrated him more. Dammit. He wasn't a loner like Wyatt. He was
good with people, had friends. Maybe seeing Caroline again, realizing how
enamored he’d once been of her, made him realize he wasn't ready yet for that
type of commitment. Hell, maybe that was the one thing he and Liberty had in
common. He had goals, his Uncle’s dream to finish. She wanted to start a new
life. Neither of them appeared to want any strings.


And that scared the hell out of him.

Amanda McIntyre grew up the daughter of a father who was a distributor for a New York magazine publishing firm, and usually had her nose stuck in the latest issue of Vampirella magazine or a Hitchcock Mystery paperback. She has been called  "a true artist in the writing realm' and her zest for life inspires her "character-driven" stories. Her passion is to take ordinary people and place them in extraordinary situations. She is a best-selling, multi-genre hybrid author and has received numerous awards and nominations for her work. Amanda is published internationally, in audio, e-book and in print. She currently writes sizzling contemporary cowboy romance and is about to release her first historical erotic thriller.

You can find Amanda here: