On the Front Porch with Cathryn Fox!! 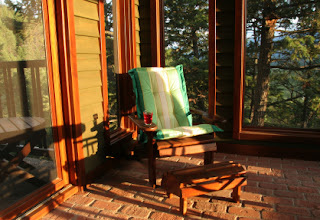 Even though its been hotter than blazes
around here, the sunsets are as gorgeous as ever! Hovering that moment just before twilight, the sky is awash in a kalelidoscope of purple, pink, and peachy-yellow layers. It is my favorite time of day, and I reminds me of the Indian summer days ahead--with crisp evenings that promise a weather change is emminent! I hope you have a chance to find a shady spot on a porch to read a book, share a glass of tea with a neighbor, or just sit and enjoy the view!


As promised, today we have another in the trio of talented authors writing the hot new series at Samhain Publishing--WHISPERING COVE!

Amanda: Without further adieu, here is a little bit about Cathryn Fox! 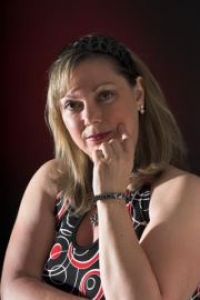 Cathryn Fox is a multi published author in the romance genre. She is a wife, mom, sister, daughter, and friend. She loves dogs, sunny weather, anything chocolate (she never says no to a brownie) pizza and watermelon. She has two teenagers who keep her busy with their never ending activities, and a husband who is convinced he can turn her into a mixed martial arts fan. Cathryn can never find balance in her life, is always trying to find time to go to the gym, can never keep up with emails, Facebook or Twitter and tries to write page-turning books that her readers will love.


Amanda: I heard you have a favorite summertime drink? We've hit triple digits this week in the heat index, what have you got for us that's cool and refreshing?


3 cups sugar
1 bag frozen raspberries
Ice cubes, for serving
Directions
Squeeze the lemons and pour the juice into a pitcher. Mix together the sugar with 3 cups water and stir to dissolve to make a syrup. Add the syrup to the lemon juice and top it up with 8 cups water. Taste to make sure it's sweet enough for you, and then add the raspberries. Mix the lemonade together and let chill in the fridge. (Keep in mind that the raspberries are tart, so be sure to sweeten enough!)

Fill glass jars with ice cubes and top them off with the lemonade.

Amanda: Sounds positively delightful! While we enjoy a bit of this tangy & sweet concotion, maybe you could share with us , what inspired you to write this story?

Cat: Hum...what inspired me to write this story? I had just finished visiting the small coastal town of Lunenburg, Nova Scotia when I was chatting with Nikki.  She mentioned she wanted to do an anthology and I jumped on it, wanting to set the stories is such a beautiful place like Lunenburg.

Amanda: How about a sneek peek from Brazen??

He was just about to shout to Trent, who was chatting quietly with Katy, to tell him to close up the kissing booth so he could do a count, when another woman dropped down into the seat across from him. Adam lifted his head to see who it was, and opened his mouth to inform her that his shift was over, but when he caught sight of the beautiful girl sitting across from him, the world around him tilted on its axis and his stomach punched into his throat. 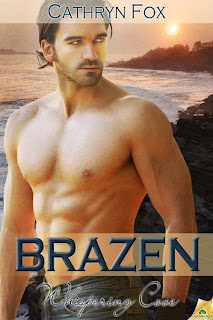 “Adam,” Josie greeted, those big blue eyes of hers staring at him as her mouth turned up in a warm, inviting smile—the same breath-robbing smile she’d given him earlier that day.
“What…what are you doing?” he finally managed to ask once he regained control of his voice.
She causally rolled one shoulder, and slid her dollar across the counter. “Like you, I’m just doing my part to raise money for the new community center.”
“Oh,” he said, and wet his lips. “I guess I just didn’t expect…”
She gave him an easy, playful grin, and everything in the way she looked at him had his body reacting with heated need. His glance raced over her face, taking in her big eyes, full, lush mouth and long blonde hair. Christ, she looked so gorgeous and sensual that it had his cock tightening to the point of pain. He shifted, uncomfortable, as his body reacted to her closeness, not to mention what that sweet jasmine scent of hers was doing to him. As his blood went from simmer to inferno, he cleared his throat and tried to relax.
“Didn’t expect what?” she asked with bright-eyed innocence, except beneath that innocence he thought he spotted something else. Something that looked like desire. White-hot desire, that was. For him.
Oh f***! (edited)
“I don’t know.” Flustered, he raked his hair off his forehead. “Never mind.”
Her mouth curved. “Shall we get on with it then?” Josie asked, her voice playful, teasing, as she leaned forward to poise her mouth open. With the top two buttons on her dress undone, her actions gave him a perfect, unobstructed view of her cleavage. Adam tried not to stare. He really did. But he was a guy, for Christ’s sake!
And a pathetic one at that.
When she toyed with the third button on her dress, Adam nearly swallowed his tongue. With his mouth salivating worse than his brother’s Saint Bernard on a hot summer day, he briefly pinched his eyes shut and worked to get his thoughts focused. But how the hell was he supposed to keep a calm demeanor when Josie, the sweet girl who’d invaded his fantasies for as long as he could remember—a girl who suddenly seemed to be coming on strong—was waiting for him to kiss her?
Adam drew a deep, rejuvenating breath and reminded himself this was all for charity. Just thinking of the kids helped him gain a modicum of composure. Okay, he could do this. He could give her a small peck and then once the night was over he’d go find Cheri, or one of the other women who’d openly invited him home for a late-night rendezvous, and f*** (edited) her long and hard and well into the morning until he got Josie out of his system once and for all.
“Adam,” she whispered, “I’m ready.”
When their glances met, sexual energy arced between them and nearly k nocked him backward. His dick jumped, his blood pumped faster, and a barrage of emotions tore through him and had his thoughts scattering in a million different directions.
He took a deep breath, but before he could get his head on straight, her warm hands touched his cheeks, igniting a fire deep inside him. That first sweet touch of her lips to his damn near shut down his brain. As tension coiled inside him, she made a small sexy noise, one that had him conjuring up erotic images of their naked bodies coming together, over and over again, and it was all he could do not to climb over that booth and drag her home with him.
Her kiss was warm, full of passion, excitement and something else, something he’d never felt before and couldn’t quite put a name to. Before he realized what he was doing, he widened her lips with his tongue and slipped inside for a deeper, more thorough exploration. At first the kiss was slow, sultry, but when he deepened it, needing in the most unfathomable ways to taste every inch of her, her mouth moved urgently under his, seeking, searching, demanding more than just his tongue.
As her mouth pressed hungrily, pressure began brewing inside him, and his body pulsed with raw need. Oh God, how he wanted. His fingers began trembling, and then, as though moving of their own accord, his hands circled her head and he fisted her hair, pulling her impossibly closer. His muscles bunched, his cock ached and a deep growl of longing caught in his throat. In the span of a second, this beautiful, sensual woman caught him off guard and completely turned his world inside out.
Amanda: Sounds like a scorcher!! Where can readers find your books, Cathryn?

HERE'S A SUMMERTIME TREAT!
ENTER FOR YOUR CHANCE TO SNAG
WET in Whispering Cove!

Cathryn is giving away one e-book to some lucky reader!!

Leave a comment about if you've read this series, or just ask Cathryn about the series if you like! You must leave a comment and your email addy so we can contact you for your win! Good luck!

With the summer waning (yet not the heat, go figure) my thoughts turn to fall! Autumn is by far, my favorite time of year! I'm wondering what our lack of rain may do to the fall colors this year! But I'm looking forward to a trip to Holland , Michigan with friends in October that's sure to have some gorgeous views!!

September 17-24 I'll be in Hagerstown, Maryland  celebrating with readers and authors the annual Lora Leighs Reader Appreciation Weekend! (RAW) It will be great to see old friends and meet new ones ! Watch for a recap here of the event!!