On the Front Porch: Nikki Duncan!

Today I have the vivacious and talented Nikki Duncan visiting to share with us about a hot new series over at Samhain Publlishing called WHISPERING COVE!

In the next few weeks, I'll be introducing the talented creators of WHISPERING COVE and their individual stories! So be sure to stop by , sit a spell, and ask your most burning questions about this wonderful new series!!

Let's start with getting a sneal peek behind this formidable writer! 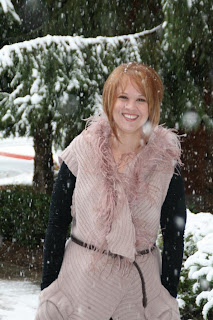 About Nikki:
Heart stopping puppy chases, childhood melodrama and the aborted hangings of  innocent toys are all in a day’s work for Nikki Duncan. This athletic equestrian turned reluctant homemaker turned daring author, is drawn to the siren song of a fresh storyline. Nikki plots murder and mayhem over breakfast, scandalous exposes at lunch and the sensual turn of phrase after dinner. It is the pleasurable excitement and anticipation of unraveling her character’s motivation that drives her to write long past the witching hour.

The only anxiety and apprehension haunting this author comes from pondering the mysterious outcome of her latest twist.


So tell us, what's the inspiratiion behind Whispering Cove?

NIKKI: Small towns, close knit friends, meddling grandfathers, and steamy nights. It all makes for a perfect melting pot for pairing up couples who belong together, even if it means pulling strangers into the mix.


Whispering Cove is a small, coastal town, created by Cathryn Fox, Mackenzie McKade, and myself. Cobbled streets, colorful buildings and flavorful characters make the place home and a home away from home for tourists. It's one of my favorite places to escape to.

And what about your story? Can you give us some insight how you came up with these characters?


NIKKI: When I began planning BURNED, I knew exactly which characters I 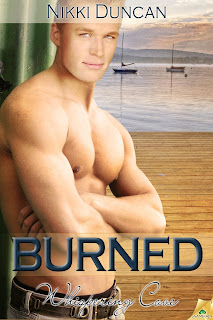 would write about. Delving into their lives and the idea of why these two best friends had avoided a more personal relationship was only some of the fun. The biggest excitement for me, beyond the couple, was watching three people (father, daughter and best friend) come together as a family. Family, after all, is one of my hot buttons - I think everyone deserves one, in whatever shape or form that's right for them.

I LOVE stories that mesh a variety of people--especially friends, family and community! Maybe you could share an excerpt with us?

Hours later, after Sophie had gone to bed and Hauk was locking up behind the last patron, with the lights in the town going down as volunteers wrapped up their work on the festival booths, Vic turned her stool to watch him.

Pent-up rage drove his steps, as it had driven every move he’d made all night. It was an aggressive, dominant side of him she hadn’t seen in full swing before. She loved it.

“What are you doing, Vic?” He stopped a few feet away. His jaw flexed with tension.

“Looking for talent for the festival. Did you forget we were supposed to be working together?” She grabbed her drink, and without breaking their stare, she used her tongue to find the straw. Hauk practically growled, but he didn’t move.

“I have some ideas on the headliner and have been thinking about some singing games that could be played to raise money for the community center. Night games mainly because they’re not exactly kid friendly.”

“Of course you have.” The energy he’d held in all evening snapped in each syllable he spoke.

“So.” She set her drink down and hopped off the stool. Moving around him, walking in a tight circle so she brushed his body, she smiled. “The first game is a sort of singing dating game.”

“How would that work?”

“We erect a screen with one chair on one side and three on the other. The bachelor…” sliding a finger down his spine, she lingered behind him, “…or bachelorette, sits in the one chair and asks questions of the contestants on the other side.”

His back rippled beneath her touch. “That’s not singing.”

“The questions have to be song related.”

He looked over his shoulder at her. “Like what?”

“Like…” She paused, leaned up on tiptoe to whisper at his ear. “How does it make you feel to hear a woman singing about the power of a kiss?”

Her breasts brushed his back and they both trembled. Her thong was getting wet as she seduced herself as much as Hauk. “Or, what would you sing to a woman you want to seduce?”

“This—” His voice cracked. “This is a dangerous game.”

She circled to his front, running her hand along his waist. Each step rubbed the moist lace against her clit, heightened her fever. “But is it one you want to play?”

Whoa! This sounds delish!! Where can readers find your books??

What do you look for in an escape? Commenters today will be entered into a drawing for a .pdf of WICKED or BURNED (winner's choice.)