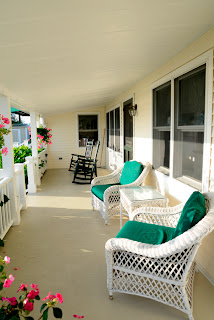 Welcome to my front porch!
It's a bit rainy here today, but the birds singing and the fresh scent of rain, is a pleasant reminder that spring is not too far away! I love to start my morning's sitting on my porch in my big ol' rocking chair, soaking in the peace and quiet of a small town, before things begin to stir for the day. It's an inviting place for having chats.Today, I welcome  Beth (aka Emma) and Kaki to the porch for a visit. Won't you join us? Grab your fav morning beverage, find yourself a comfy spot, on the porch swing, and get to know these talented authors and their delightful work!
~Amanda

First up is the effervescent and gifted, Beth Williamson, who also writes as Emma Lang! 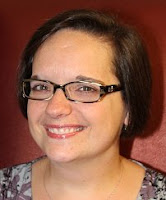 BIO:
Beth (aka Emma Lang), is an award-winning, bestselling author of both historical and contemporary romances. Her books range from sensual to scorching hot. She is a Career Achievement Award Nominee in Erotic Romance by Romantic Times Magazine, in both 2009 and 2010.
Beth has always been a dreamer, never able to escape her imagination. It led her to the craft of writing romance novels. She’s passionate about purple, books, and her family. She has a weakness for shoes and purses, as well as bookstores. Her path in life has taken several right turns, but she’s been with the man of her dreams for more than 20 years.
Beth works full-time and writes romance novels evening, weekends, early mornings and whenever there is a break in the madness. She is compassionate, funny, a bit reserved at times, tenacious and a little quirky. Her cowboys and western romances speak of a bygone era, bringing her readers to an age where men were honest, hard and packing heat. For a change of pace, she also dives into some smokin’ hot contemporaries, bringing you heat, romance and snappy dialogue. Life might be chaotic, as life usually is, but Beth always keeps a smile on her face, a song in her heart, and a cowboy on her mind.


WHAT INSPIRED YOU TO WRITE THIS STORY?

I find inspiration every day and in many places, words and faces. Caleb’s story is the third in the Circle Eight series. He was an impatient young man, eager to take on the world in the first two books. I knew he would take a long journey and in the end, find where he belonged.
Every young man has to find their own path and Caleb is no exception. He had always lived in the shadow of his big brother and his murdered father. I knew there was a good man beneath the arrogant exterior but it took a strong woman, Aurora, to ferret him out. She was inspired, as all my heroines are, by strong women in my life. As a lady blacksmith, I gave her a profession that required her to be tougher than most. She swings a hammer and pokes a hole in the big, bad wall Caleb had erected around his heart.

Here's a little inspiration Beth had for her story! 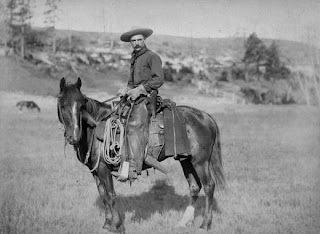 LEARN MORE ABOUT BETH AND HER BOOKS AT http://www.bethwilliamson.com/

LEAVE A QUESTION OR COMMENT FOR BETH (OR EMMA) TODAY AND BE ENTERED TO WIN AN E-BOOK OR PRINT COPY OF CALEB!! 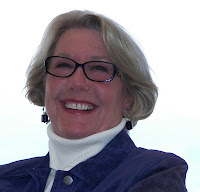 In between her years as a mother, teacher, commercial artist, reluctant collection agent and surly secretary, Kaki fooled around with writing. Finally, after twenty-five years of procrastination, she sent her first manuscript out into world. Now, five years later, she’s a RITA winner and three-time finalist, has an e-novella and six historical westerns in print, and is busily working on her third trilogy. Her next book, BEHIND HIS BLUE EYES, a Heroes of Heartbreak Creek Novel, will be out August 6th. Then in January, she’s joining Jodie Thomas, Jo Goodman, and Alison Kent in a western anthology, BOOTS UNDER HER BED. But here’s the thing: none of that fabulousness happened until the year she went on Social Security. So, take heart, all you aspiring authors out there. It’s never too late, and you’re never too old. If you have a dream…go for it.

WHAT INSPIRED YOU TO WRITE COLORADO DAWN?
For one thing, I wanted to create a hero who could rise above a disability with which I’m all too familiar: Dyslexia. And I also wanted to center the story around two of my favorite things: the American West, and a Scotsman. I’m a big fan of throwing my characters into unfamiliar surroundings or situations, then watching to see how they react. In my first book, PIECES OF SKY, I tossed a proper (and pregnant) Englishwoman into an all-male household on a New Mexico ranch. In COLORADO DAWN, I dropped a career cavalry officer into a dying Colorado mining town, where no one cared that he had fought in India and the Crimea, or that he was a Scottish Viscount, or that he was accustomed to getting his own way. They just didn’t want him taking their friend (and his runaway wife) back to Scotland.

“I’ve missed you, Maddie, so I have.” His smile faded into something raw and unfamiliar to her. “Dinna run from me again, lass. I couldna bear it.”
Tears pressed behind her eyes. Biding time until they passed, she traced a fingertip over his lips. “I didn’t run, Ash. I drifted away. And you let me.”
“I ken I was wrong. But I’ll not be doing that again. I swear it.”
In that unguarded moment, she glimpsed the brash, handsome young cavalry officer who had captured her heart six years ago. Who held it captive still.
Yet nothing had changed.
No matter the fine words, he would leave her again. He couldn’t help it. Duty would call, and honor would not allow him to disobey, and she would be left bleeding in his wake, just as had happened before. The thought of it was an unseen weight that pressed against her heart until the pain of it stole her breath away.
Oblivious, he sighed and closed his eyes. “You make me daft, lass, so you do. But I’m no’ complaining.”
Oh Maddie. You foolish, foolish woman.
Emotion clogged her throat. Why had she opened herself up to the same heartache that had nearly destroyed her once already? Had she learned nothing?
“Ash, what have we done?” To ourselves. To each other.
He opened his eyes and looked at her. They were the cool green of tarnished copper, or the earliest spring grass, or a high mountain lake fed by icy peaks. Changeable. Mysterious. Compelling.
“Forgotten already, love? Must I show you again?” He said it lightly, but she heard the tension in his voice, felt it in his arms when he pulled her on top of him. They stared into each other’s eyes—skin to skin, heart over heart—yet separated by that unbridgeable gap between duty and desire.
“Puir lass.” Reaching up, he cupped her head in his big hands, his fingers so long his thumbs reached to her temples. “I ken you’re confused, love. As am I. But this I know, Maddie Wallace. We belong together. Apart, we’re less than we were meant to be. But together, we can be more than either of us dreamed.”
“In Scotland?” She tried to keep her voice from wobbling but failed. “I don’t need a title, Ash. I need my work.”
“You need me.” He said it with fierce certainty, his eyes hiding nothing from her. “You need me.” He kissed her lips, then her closed lids, blotting away the tears she could no longer hold back. “And I need you.” Brushing his lips across her cheekbone, he whispered into her ear, “Ride me and I’ll prove it.”

For more information and excerpts of her books, please visit her website at www.kakiwarner.com

Leave a question or comment for Kaki to be entered to win 3 books in her western series!!

My thanks to these ladies for stopping in to visit, join us tomorrow when we talk to Holly Bush, Carolyn Brown, and Sabine Starr~

Make it a good one y'all!