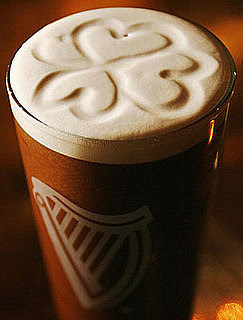 Happy St Patrick's Day to all! I'm a strong mix of both Scotch and Irish--McIntyre and MacIntosh to be sure. So, here's a toast to all of you this day and I wish to leave you with this lovely blessing as we part, but do know that you are always welcome on the porch!

As you slide down the banister of life, may the splinters never point in the wrong direction!

~*~
Welcome and it s the last day of the LADIES LOVE COUNTRY BOYS week long celebration! It's been a delightful week and I want to thank my guests--authors, readers, and aspiring writers, perhaps for coming by for a visit! Its great to know that the love for 'country boys' beats strong and fierce in the hearts of readers!!

There's a bit of a nip in the air and the forecast is callin' for a wee bit of rain. Its to be chilly , sure, but the friendship and talk of our next two author guests is sure to keep us quite warm! Please welcome Cat Johnson and Lorelei James! 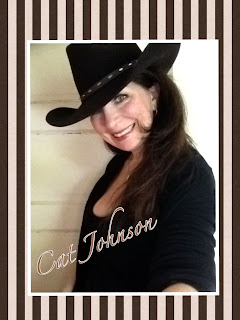 About Cat Johnson:
A self-proclaimed promo ‘ho, Cat Johnson is known for her creative marketing and research practices. Consequently, Cat has sponsored bull riding rodeo cowboys, owns an entire collection of cowboy boots and camouflage shoes for book signings and a fair number of her consultants wear combat or cowboy boots for a living. She is currently contracted with Kensington and Samhain.


Cowboy Inspiration:
Living in New York State, just an hour north of Manhattan, we don't see many true cowboys hanging around. That's probably why my radar goes off whenever one is in the vicinity, whether it be the son of the farmer who delivered the hay for my horses who became the inspiration for Jared (Red, Hot & Blue series) or the ropers I saw at the small local rodeo in Connecticut who helped me craft the two hot tie-down ropers in Texas Two-Step (All Romance eBooks).

I suppose if I'd grown up in cowboy country, had my heart broken by a few of the sweet talkers, and were surrounded by them constantly, I might not be so intrigued by this breed of man. Perhaps I never even would have written one. For that reason alone, though I do long for a slowly drawled "darlin'" and the tip of a cowboy hat in real life, I guess I should be grateful I'm a New Yorker. That sure comes in handy when writing how the first encounter with a real cowboy such as One Night with a Cowboy's Tuck can make a city girl like Becca tingle like in the excerpt below…

ONE NIGHT WITH A COWBOY 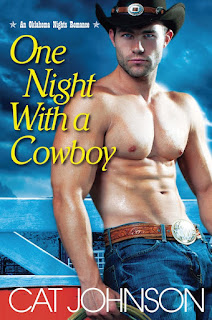 Oklahoma Nights, Book 1
One Sweet Ride…
Oh yeah. A single look at the leggy blonde in the stands and Tucker Jenkins is
ready to buck all night long. It’s time to forget all about his cheating ex and his usual hands off policy.
One Hot Night…
Becca Hart is an East Coast professor. Not a buckle bunny.  But no degree can prepare her for the moves of the sexy bull rider she hooks up with at her first rodeo … Or the shock of finding him at her first Oklahoma State University staff meeting.
One Happy Ending…
Tuck knows it’s all about holding on, no matter how wild the ride. Now he just has to convince Becca that a rough start out of the chute doesn’t mean they aren’t a smokin’ combination …

Excerpt:
Tucker laughed, deep and low. A sound that went right through her core.
“I’ll explain the different events to you while we watch.” He shook his head, still grinning. “It’s been a long time since I’ve had to explain rodeo to a city girl.”
She got a twisting of irrational jealousy in her belly, not that she’d ever assumed she was the first woman this cowboy had charmed. “Oh, really? Have you had to explain this stuff to a lot of city girls?”
That elicited another hearty chuckle from Tucker. He leaned lower, closer to her ear. “Never one as cute as you.”
He straightened again right after he spoke, but the warmth where his breath had wafted across her skin remained. It intensified and spread through her. Becca swallowed hard. She glanced at Emma, who luckily was getting a lecture from Jace about something rodeo related, judging by how he was pointing out things to her in the arena. Good. She didn’t need Emma watching her. She knew there was no hiding from her sister the blush creeping across her cheeks.
~*~

Prize:
LEAVE A COMMENT OR QUESTION FOR CAT AND ENTER FOR A CHANCE TO WIN A DIGITAL COPY OF BOTH TEXAS TWO-STEP (M/F/M menage) and JARED (M/F)

LEARN MORE ABOUT CAT AND HER WORK AT HER WEBSITE 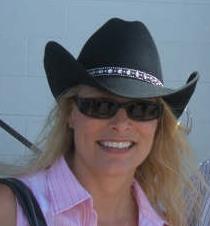 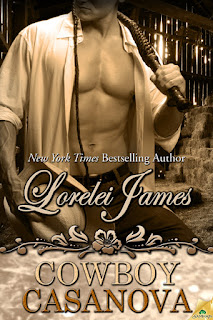 Ben was contemplating sub choices when a flash of red caught his eye. He swiveled on his barstool to watch the siren in the silk kimono saunter through the room.
Oh hell yeah, his night had just improved tenfold.
She perched on the edge of her barstool, every inch of her so prim and proper Ben’s fingers itched to muss her up.
After he watched her for a few minutes, he asked Murphy, “Who is the hot number in red with Layla?”
“Her name is Angel.”
“Angel,” rolled off his tongue. Perfect name for her. Sipping his beer, he focused entirely on her. Lush body, lush mouth. Great smile. Expressive eyes. She was off-the-scale sexy in his opinion. So why the hell was the woman wearing a wig? Not a subtle one, but a sleekly styled black wig, the last inch of hair dyed candy-apple red. Was she trying to look dangerous? Hip? Naughty?
Be interesting to coax the truth from her. Some very interesting extraction techniques popped into Ben’s head.
She must’ve sensed him staring at her because she turned and met his gaze head on. Their eyes remained locked for several long moments as Ben waited for her to lower her gaze—as he was accustomed. But she returned his intense eye-fuck full bore until Layla demanded her attention.
Holy shit. Dismissive wasn’t a reaction Ben usually got, especially not in here. And that intrigued the hell out of him. Casually, he said to Murphy, “Introduce me to her.”
Murphy sighed. “She’s not for you.”
“Why not? Has she already picked someone for tonight?”
“Not exactly.”
Ben faced Murphy. “Then exactly what’s the problem?”
A devious smile appeared. “She’s not here as a sub.”
“She’s a guest?” Ben frowned.
“Nope.”
“She’s here as special entertainment?” That’d explain her wacky get-up. Some clubs in bigger cities had themed nights where members dressed up. Cody and Trace had threatened to try it at the Rawhide, but Ben secretly didn’t believe that’d fly in Gillette, Wyoming. Then again, he hadn’t been around to voice his opinion in the last month.
“No,” Murphy said. “And she’s not here to bar-tend, waitress or clean the bar.”
Which left one other possibility but Ben couldn’t wrap his head around it. “She’s here as a…Domme?” After Murphy nodded, Ben’s jaw dropped. “No. Fucking. Way. A Domme. In the Rawhide.”

Leave a question or comment to win a digital copy of COWBOY CASSANOVA  from Lorelei!

WINNERS CHOSEN THIS WEEK WILL RECEIVE WORD FROM THE AUTHORS ABOUT YOUR PRIZES IN THE NEXT FEW DAYS! THANKS TO ALL FOR COMING BY!
at March 17, 2013