If you happen to be in the New Orleans area in the next few days , check out this very special book signing by two very gifted authors! 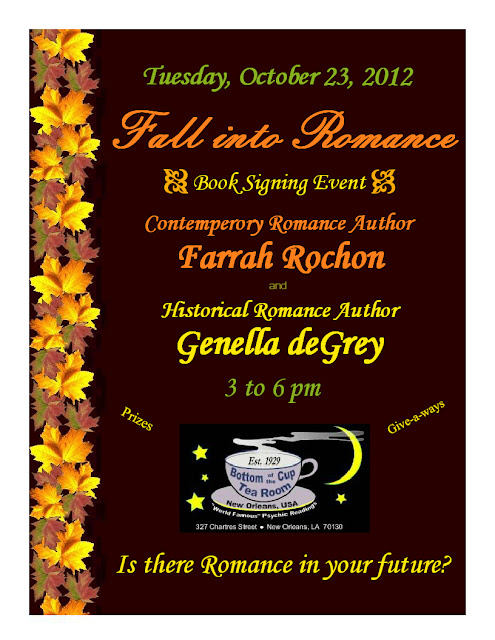 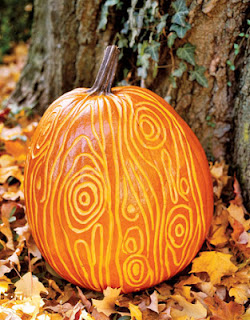 Thank you to all of the comments shared about your favorite time of year!

As many of you indicated autumn with its wonderful colors--burnished reds and golds, coppery hues and pink and purple sunsets were a clear favorite! Mine, too!

Alas, only one winner for the two books in my Samhain package could be chosen and that winner is
Becky!!

So Becky if you'd email me at:
amandamcintyre.author @ gmail dot com...I'll send you your "Samhain" parize package!!

Thanks to everyone for playing! And watch for more as we approach November 23 (Black Friday!!!)

I have some special surprises coming up with my time-travel release of FALLEN ANGEL!!

Until next time~
Amanda

Things That go Bump In the Night!

I admit to having a vivid imagination. It certainly helps as a writer. I also have a healthy respect and belief in the supernatural and agree that there are some things better left alone.

But what would a celebration about Samhain be without an unexplained experience or two? 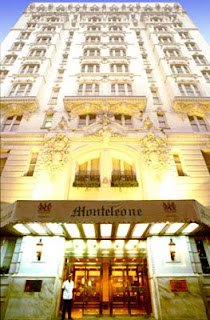 However, I also love history and when I got the opportunity to attend Heather Grahams Writers Workshop last year in New Orleans, I didn't think twice. It was an amazing place steeped in history, abundant in diverse cultures and utterly fascinating (to me anyway!) There are so many more places there that I'd like to visit, but I want to focus on an experience I had last year while staying at the Monteleone that has changed forever my perspective on the subject of the historical haunted places.

I've been to many historical sites, granted. Most have heard of those places where the hairs on the back of your neck stand on end or when a chill sneaks up your spine for no reason.

Never had I truly experienced it for myself.

There were three separate incidents. But I'm going to highlight those that happened to me directly.

The first was when my roommates and I were in our room one evening and I noticed a voice mail on my phone. With all the talking in our room, I decided to step into the hall where it was quiet. A few feet from our door just past where the hall cuts left to the elevators, there was a small set of steps leading up to another level--presumably a suite. There was no one in the hall, so I sat down on the step and began to go through the process of retrieving my voice mail. I had a little trouble at first getting a signal and when I did, I held the phone up to my ear and heard the message. I then began to dial a family member to see how things were going at home when I heard a heavy sigh, as though someone were seated next to my left shoulder and leaning toward my ear. I felt nothing and thought perhaps it was someone waiting at the elevators that I'd missed seeing coming down the long hallway in front of me. I peeked around the wall to the elevators and found it empty.

Chiding myself for watching 'The Shining" one too many times I sat back down on the step and redialed the number. Again the same sound--a heavy sigh--emitted near my left ear. I stood quickly, my heart racing and decided clearly I must have been disturbing somebody. All those same things happened to me as I pounded on the door for one of my roommates to let me in. The hairs on the back of neck and arms rose and a cold chill washed over me. That has never happened to me before.

The second incident the morning of the last day of the trip. Our plan didn't depart until later and my friends had things to do to help Heather. So I took my leave and went to my room to do some preliminary packing. It was perhaps mid to late morning and I was sorting things on my bed, when there was a knock on the door. I called out "just a moment, please" thinking it was one of my roomies forgetting her key, because room service had already been by.

There was no response, no sound of walking in the hallway or doors opening to other rooms. I walked the short distance to the door and peeked through the keyhole and saw no one. I then opened the door and looked down the long hall to my left--seeing nothing, and looked to my right a mere few feet  to "those" steps and the elevator bay--again, nothing.

This came the day after the incident above. 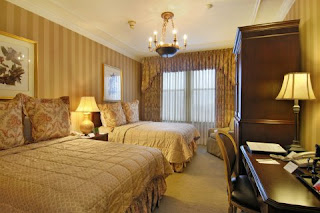 Now, you may or may not believe in such things and perhaps it was only my imagination. But even as I write this from my memory, my shoulder twitches and I shrug just as I did that night when jarred unexpectedly, heard that breath so near to my ear.


It made me a believer.


The Monteleone has many a tale within its spectacular walls as do many  of the grand historical places located in New Orleans. And as a plug to my dear friend, Heather Graham, I will tell you that her Annual Writers workshop that continues its support of New Orleans  and its economy after the Katrina devastation is worth every penny. Do yourself a favor and check it out. As an author New Orleans is a treasure trove of historical and cultural research! And don't forget a trip by carriage to the Cafe Du Monde!

If you want to feel like you've stepped back in time, if you want to see the grandeur and down-home hospitality that is quintessential New Orleans--after what I've experienced  I'd say there are those on 'both sides' of life--before & after--waiting to share their great city with you! 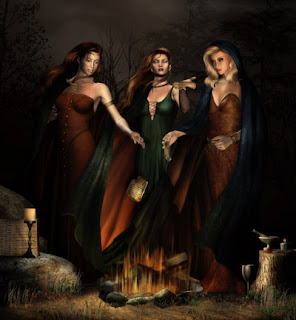 One of my all-time favorite songs growing up was the mysterious song, "Witchy Woman"by the Eagles....here my talented poet friend who shares my passion for the Celtic and ethereal has allowed me to post her poem celebrating that little bit of "witchy" woman in us all;)

Have you ever met a witchy woman? If you have you would know.
Have you caught her sensual gaze, noticing her eyes just seem to glow.

She can entice and tempt you into anything with just a caress or a whisper in your ear.
You wonder how she always knows what will come to be, yet you suppress your fear.

She may attempt to explain away her many gifts as luck or coincidence.
No matter how long you may know her, you find that you are always in suspense.

You come to realize what happens around her is not luck at all, but a precious gift.
And  if someone were to horribly wrong her, how their fates might suddenly shift.

Pure bliss you find in her passionate caress and kisses you imagine evermore.
And in the same breath you realize it is a truly an enchanting woman you have come to adore.

I met Kimberly originally a year ago at RAW 2011 and we had such fun again this year at RAW 2012 and when I found out she wrote poetry, I knew I wanted to have her as a guest on my Samhain celebration blog! You can learn more about this beautiful and gifted woman and on her Facebook page!

Do you write poetry about ghostly specters, and moonlit skies? Send them to me at amandamcintyre.author@gmail.com and they may get posted here during the month as we celebrate Samhain!

All month I'll be celebrating the launch of my Samhain inspired story, MASTER OF DESIRE, with the legends and lore of the season as well as with some gifted friends!!

If you'd like to see more of Kimberly's great photography, check out her interview with me today at BOOK CHICKS BOOK CLUB 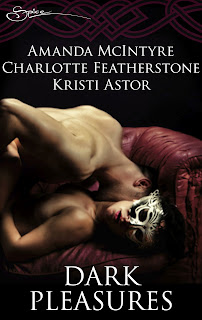 Meantime, here is a small taste of my story about an aging opera singer, whose rise to fame has up to now sufficed in satisfying her every need, but deep inside, she longs for more--longs for the one man who would love her unconditionally, without the fear of breaking her heart--a man born of a young woman's wish on the Samhain moon years before....

Excerpt from Master of Desire~
She eyed the crowd, small, but with notable figures of the London ton still making an appearance. The show would survive its run. Careful to steer away from the temptation to search the crowd for a dark-eyed stranger, she found her fourth glass of champagne and carefully eased herself down on the bottom step of the grand staircase. No one seemed to notice, she thought with amusement, sipping her drink. They were far too engaged in trivial discussions about the latest in Paris fashions or the juiciest gossip. She grew bored, restless.
Their driveling conversations grow wearisome, don’t you agree?
The voice mingled with the pleasant buzz in her head.  She chuckled, though, agreeing with this phantom in her head. Firm thumbs pressed against the back of her neck, kneading softly, delightfully easing away the tension.
“Where have you been?” she whispered, rolling her head side to side to accommodate his massage. The heavenly caress moved to the muscles between her shoulder blades.
I have been right here, waiting, watching.
Her eyes drifted shut and she leaned back supported between his muscular thighs. She inhaled the heady scent of wood smoke and an early-morning walk in the forest after a cold rain.
You’ve been under a lot of pressure, haven’t you, my lovely?
She nodded, lost in the bliss of his perfect fingertips on her flesh.
If you were mine, I would see to your every need. I have seen your desires, my lovely. I exist in a constant state of need, willing to satisfy each one.
Francesca’s throat grew dry. She imagined him seated behind her, gently massaging her shoulders, taking care of her. “You truly care for me, then?” Her words slurred softly, a quiet plea issued from a weary soul.
I am here to give you whatever you desire.
She smiled. His cool fingertips smoothed down the slender curve of her throat, dipping down inside the bodice of her gown. “Who are you?” she asked, her thoughts in a lust-filled haze.

Have passion sent to your Kindle!  Order now!

Join me all month long as I celebrate the Celtic Calendar festival of Samhain in pictures, poems and prose!! Come back often , you shan't know who'll be showing their wares!;)

There are so many reason I love this time of year! The colors are breathtaking as is the surprise of a chilly morning after a long, hot summer! But it is a magical time also, one that stirs my Gaelic roots (MacIntosh and McIntyre) reminding me of the rich, tapestry that Mother Earth gives us to care for and cherish. 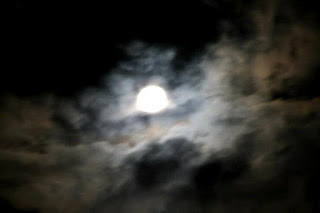 This past weekend in Pittsburgh was a full moon, or "Harvest Moon" as its sometimes called. Though it had seemed the weather the day or two previously was more like Seattle with intermittent showers and sun, the clouds this night were quintessential for showing the many moods of an autumn night sky. 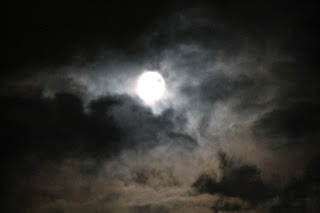 These pictures  were snapped by gifted friend and photographer, Kimberly Rocha around 10:30 PM or so September 29, looking up into the eerie cloud-covered skies an Allegheny mountain ridge, near Pittsburgh, PA. Barnabas  (vintage Dark Shadows) Collins quality, the moon and skies above blessed us with a ethereal display that was truly chilling!

Available now! Master of Desire (In Dark Pleasures-erotic tales of the Samhain season!