February 1-ALL DAY LONG with DECADENT PUBLISHING!
Bring in the New Year with Books and Coffee Time Romance & More 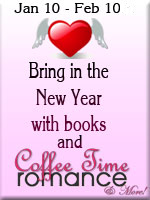 Come visit with the authors, read excerpts, chat with editors and find out how you can win a brand new kindle already loaded with SIX Decadent titles!

And visit my contest at FRESH FICTION
runs to February 7th!
The ART of ROMANCE 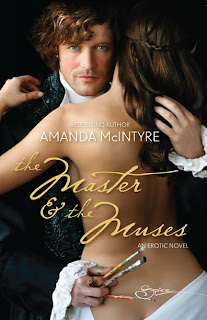 ﻿
Win an autographed copy of the book RT BOOKreviews gave 4.5 stars and called  "a special reading experience," plus a gift card to pamper yourself from Bed, Bath & Beyond!
While its chilly outside, you can be inside chatting, reading and winning!!
See you at Bring in the New Year with Books and Coffee Time Romance & More tomorrow and maybe have another surprise or two awaiting you!
Be well~
Amanda
at January 31, 2011 1 comment:

Email ThisBlogThis!Share to TwitterShare to FacebookShare to Pinterest
Labels: Amanda McIntyre, by the light of the silvery moon, Coffeetime romance, contests, Decadent Publishing, Fresh Fiction, The Master and the Muses

Its been a while since I posted last--so much of life has happened, but perhaps best was reconnecting with a sibling who I'd not seen in many years! It was an awesome experience and one that has given me a new perspective on life, goals and relationships! So here's wishing all of you a Happy New Year, filled with bright hopes and new beginnings!
To catch up on things, I'm pleased to announce that for those of you who may remember Sheriff Jake Sloan from Wild and Unruly--well, Jake and Lilly will be making a comeback tour along with a related duet title called Forbidden Angel, featuring a nephew of Sheriff Sloan's 100 years later and a soiled dove looking for man whose music she fell  in love with.
Both stories are time-travel flavor, with one going back in time, the other coming forward in time, using the same setting of the Sweet Magnolia brothel. It's a lot of fun and inspired largely by the song, "Cowboy Take Me away" by the Dixie Chicks and "the Cowboy in Me" by Tim McGraw.
***
In the spring of this year, March and April consecutively, will be the release of my erotic Hitchcock-style story, MIRROR, MIRROR in Naughty Bits, Vol.III. ....giving a glimpse inside the lives of  a wealthy, beautiful woman, who would do anything to please the whims of her decadent husband, until the game becomes deadly!

Following will be the next in the Celtic Spice books, The Pleasure Garden which includes SACRED VOWS, a forbidden romance between a Gaelic woman and an Englishman bound for Rome.

Also, I'm proud to announce the soon-to-be -released TWICE UPON A TIME-faerytales with a dash of modern magic !  Included among many other great stories, is my modern retelling of THE PRINCE and THE PEA, featuring a struggling ad rep for a mattress compant and the "geek" co-worker who she pre-judges, until her faery godmother sets her straight and opens her eyes to what lies beyond the cover!

In late 2010, while at a booksigning and doing what she loves best--meeting her reader fans--author Tina Gerow was struck with symptoms of a dangerous medical condition known as Arteriovenous Malformation. What followed was a series of operations, a lengthy hospital stay and rehabilitation. We are happy to report that Tina is doing well, though her complete recovery is an ongoing process. In cases like this, medical expenses can mount rapidly and, as it often does, the literary community steps in to help however they can. This book is the result of an outpouring of just a few of Tina's friends from the Romantic Times Faery Court.

This one-of-a-kind anthology includes the literary talents of Eden Robins, Amanda McIntyre, Sahara Kelly, Taige Crenshaw, Vijaya Schartz, Janet Miller, Joy Nash, Liddy Midnight and Kayce Lassiter...and a contribution from you--the buyer of this book! Every author is donating 100% of their royalties to the fund established to assist Tina with her medical bills.

Available soon online and in bookstores, this book will premiere at the upcoming Romantic Times Booklovers convention being held in Los Angeles, April 2011. Published by Decadent Publishing.