Rae Winters started writing romantic short stories and poetry over seven years ago and, she has been writing them ever since. An avid reader of romance, erotica, fiction, historical and mystery books, she decided to spin her own tales. She has sold six Cub Bites confession e-books, and she has three books that have been released as Apple Apps through Arrow Publications and MyRomanceStory.com. She has published book reviews, sensual poems, and confession stories for five national women’s confession/romance magazine.  Rae is currently working on several erotica tales, short stories, and her first women’s fiction novel. Her first book for Red Rose Publishing is due out in August 2010. 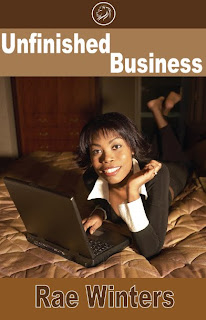 Sydney Harris is ten days from walking down the aisle when her fiancé, Lance Edwards, develops cold feet. He skips town taking a transfer to the Washington, D.C. office. She's devastated, but sometimes trouble is a blessing in disguise.
Two years ago, Sydney dropped handsome Phoenix Sanders, a construction worker. She believed she’d been wasting her time with him, and he wasn’t serious about marriage. But when she proposes a marriage of convenience she will find out just how wrong shed been.

Excerpt:
Nix came to the door, towel draped against his sculptured body, moisture from his recent shower dripping down his chest. He looked good enough to eat. My fantasy from yesterday’s business meeting came back in real time, as I stood there mesmerized by his body.


"Sydney, what are you doing here?"

"Make this quick, I've got an early call tomorrow morning," he said, opening the door wide enough for me to pass through.

My nose honed in on his after-shower-scent and I found myself wishing to join him in the shower as we had done many times before: showering, making love, and then showering again.

"This is a beautiful house, Nix. You just moved in?" I asked. We were surrounded by unopened boxes.

"Yeah, I moved in on Saturday."

He didn't answer me, but he did shake his head which I took as a yes. I went exploring. The basement level was unfinished, and the main floor had a spacious kitchen, formal dining room, and a huge living room. Eagerly, I climbed the stairs to the second level, and found three bedrooms. Two of them were big enough for a nursery and a combination library-study.

I walked into his master bedroom which was the largest of the three bedrooms. It was elegantly furnished, and the walls had crown molding.

"Is this your work? I like what you're doing to it, celery green wall paint, and my favorite is the French doors. Where does that door lead to?"

"Sydney, did you come here to talk, or to see my new home?"

I could hear the annoyance in Nix's voice.

"I'm sorry. You know my passion for decorating a room. I think if you put the sleigh bed against the right wall, and not the left, it will give you even more space."

"I'm a foreman now, and I have to be in Staten Island at five A. M., so say whatever you have to say, now!"

Nix was now standing in front of me; his sherry-chocolate eyes smoldered me, and stopped me in my tracks. I slowly backed away from him, feeling sexually threatened. He smelled so good, his chest glistened, and I wanted, no needed to touch him. I fought my inward desires, because I was wet with need, and I needed to talk to him...
~*~

Can you describe your favorite hero/heroine?
My heroes are take charge kind of men, but at the same time can be tender to their women. He would rub her feet after a hard day at the office, run her bath water, and tuck her into bed seeing to her physical needs above his own. He isn’t without flaws—stubborn, audacious at times, but sexy, and great in bed.


My heroines are independent, strong, and feisty women who aren’t afraid of going after the men in their lives. They will protect their men at all cost. Even going up against whoever would hurt them—ex-lovers, family members, etc. Together they’re unstoppable—passionate, and they would light up the sheets.

To add to the fun this week, Rae is giving away an ebook copy of her new book! Just leave a comment to  enter your chance to win!  Reader Question: How would you react if you discovered the office vixen touching your boyfriend in an inappropriate manner? This is the man you love. You've been living with him for the past two years. Would you be quick to judge him based on the evidence before you?

You can learn more about Rae and her books at http://www.raewinters.com/
Thanks Rae! Join us next week when we welcome another author of Lady Leo Publishing and Arrow Publications on their summer blog tour!