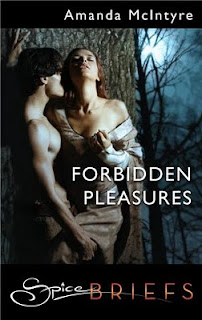 Britannia, 400 A.D.
Torin has dedicated his life to battle, first as a Roman warrior and now defending his native Britannia from the Saxons. Finding pleasure with a woman is far from his mind--until he encounters Alyson, a flame-haired Celtic servant who arouses his desire like never before.

Alyson is also drawn to the strong yet gentle warrior, especially when she feels magic in his touch. How could she resist his allure when the gods themselves compel her to be with him? But while fate may have a special destiny in store for Torin, it is Alyson's choice to act on their passion....

Sharing with you the lovely cover art from Harlequin Spice for my upcoming extended Spice Briefs called FORBIDDEN PLEASURES ;)  The gods have done it again;)
So readers wouldn't have to wait to read about Torin, Sierra's banished brother from TORTURED--I was given permission to write an extended novella featuring what happened to Torin and how he and Alyson met in the months prior to Sierras escape from the Saxon prison.
Here then, is an excerpt of when Alyson receives her calling by the gods to become their messenger--going to Torin to explain his higher purpose in helping the Celtic people reclaim the land stolen from them by the brutal Saxons, led by Lord Aeglech. She is not exactly thrilled with the idea...
Excerpt:
Below, lights flickered within the simple huts of a fragile new beginning. Alyson raised her arms toward the star-sprinkled sky, embracing the energy flowing from the land, its ancient wisdom bestowing to her a balance to her confused spirit, clearing her thoughts, emptying her mind.

She held her eyes closed, focusing harder. Laughter and music from inside the villa filtered out into the night.

The voice, crystal clear, issued its command. She opened her eyes and scanned the darkness, expecting to see someone emerge from the shadows. Her spirit reverberated with her connection to the Goddess Mother Earth. She began to see not with human eyes, but with her spirit sight. Gooseflesh rose on her arms, her ears became aware of the tiniest sound. Breathless, she waited in awe-inspired wonder. Urged to do so, she turned to look at the gardens outside of the rooms that were prepared for the Roman guests. A soft wind lifted the hair from her neck and she debated the origin of this voice. Was it born of her own desire?

Go to him. He must believe.

She fought the voice in her head with her fists clenched her fists at her sides. Why must it be me who is your messenger? Such a request will serve to place my family in danger. What shall I say to him? Why would he believe what I say to him? Alyson knew that once the gods speak, her spirit would not be at rest until she’d completed the task, but that did not mean that she did not question the wisdom of it or the dangerous consequences if she was caught sneaking around the Roman quarters. She wished there was time to create a spell to reveal what she was to say to him. Instead she had only this nudging and the brief, but powerful vision. Her best hope was that when she encountered him, the gods would give her the words to say. As though prodded by a ghostly phantom she stumbled over a stone as she turned to pick her way over the uneven ground in the darkness.

Alyson paused, ducking behind a hedge and waited until the servants lighting the garden torches had passed. She hurried along the path toward the room designated for the guests, the coarse rock pressing against the thin soles of her slippers. As she neared the room, the thought occurred to her that she may well find Tulia in his bed. She glanced up again at the ethereal moon, challenging the gods. She hesitated, unsure whether to continue. At the far end of the villa, she could hear the musicians punctuated with applause and cheering. Not a soul, it seemed stirred within the guest rooms. Her heart raced and rather than take the risk, Alyson pushed from the wall, determined that she’d imagined the voices, in lieu of her own emotional entanglements about the Roman.

A firm hand over her mouth squelched the scream bubbling from her throat. Alyson froze, knowing from the size of the man’s body pressed against her that it was useless to struggle. Her brain fought to find a reasonable excuse to relay when she was brought before her Roman master.

“Sssh, I mean you no harm. Promise that you will not scream and I will remove my hand.”

His voice spawned a shiver across her shoulders. She nodded, tears prickling at the corners of her eyes. Alyson waited as he eased his hand away, his other however, still held her firm around her waist.

“First, I must ask you. Are you a spy for the Saxon?” His voice was firm.

Alyson’s throat grew parched from fear. “Nay,” she managed to squeak. The warmth of his embrace was not like any she’d known, her insides quivered with familiarity. Though she’d yet to see the face of her captor, she knew already it was the man she was sent to speak to.

“If you try to run, I will call my men. Do you understand?”

“Yes,” she whispered and as he dropped his hand, she turned to face him. “Do you think I would work for the general and spy for the enemy?” The sting of his words wounded her honor.

“My apologies, milady. Then with any luck, perhaps your coming to my room is for more personal reasons?” He slid the back of his knuckles down her cheek.

She was almost bewitched by his swaggering, smooth-talking confidence. She batted his hand away. “On the contrary, milord, you are lucky that I did not draw my blade thinking that you were a Saxon invader. What purposes have you for sneaking around in the dark?” she demanded.

He chuckled low. “Good lady, these are my quarters, are they not?” He waited a heartbeat before he spoke again. “Do you carry a blade, in truth?”

She stepped into a swathe of clear moonlight and hiked up her gown to show him the blade tied to her leg. “Rarely do I say what I do not mean, milord.”

He lifted his hands in defense, but his white smile showed in the shadows. “You have no further need to convince me. Now, if you are not a spy, nor are you here for…well, reasons that I must say I am saddened by, then why do you sneak into my chambers at such great risk?”

have a good one! back to the writing dungeon....