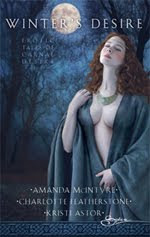 Don't know how you spent this day, but for me it was pretty late before I decided to shower and get my keester in gear.;) The temps outside presently here in the Midwest are bone-chilling to say the least, but I managed to stand outside for a moment or two last night and gaze up at that fantastic "blue moon" and thought in truth..you won't believe it..of the Druid priestess in the prologue of Winters Desire...yes, exactly the one with the perfect yawbos on the cover! Here is a reminder, if you are not familiar with said cover.

Yawbos aside (and I am nowhere or ever will be near that perfection) Yet I couldn't help but get a sense of what it might have been like, standing in the bone-chilling dawn of that winter morning, arms rasied to the moon-with a wish/prayer/hope so fervent in the woman's soul that her body aches for the want of it.

We never wrote an epilogue addressing what happened to that woman. Did the Universe grant her that deeply-felt desire? Did she ever see her true-love again? The vision is such a powerful one--the ending so uncertain and yet the wish so desperate.I like to think they somehow wound up together.

Haven't you ever wanted something so badly you could taste it? And oft times it isn't enough to just want it, but to take the steps to make that wish come true. It's a risk, alot could happen, you might get hurt--
but you might achieve that wish or in the waiting and sometimes you receive a gift far greater than the wish you made.

I thought of how far I've come in my writing, the incredible people I've met on so many levels of this industry and the experiences I would never have had, had I not risked taking that first step.

And with each new step, there is more to learn, more to achieve, more potential and possibility (my all time favorite words!)  but there is also more risk. One of the many sayings I have taped to my pc is "The Greatest Risk, is Not Taking One." and that is how I approach this New Year with its rare blue moon and the magic that is possible if you believe.

Blessings and a year of potential and possibility to us all~