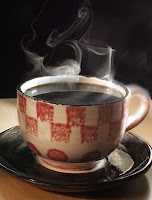 She's been called the "Texas elf," the "head buwannah", the "queen"--but whatever title you want to give this woman, she is a powerhouse of ideas, wisdom and energy. Jo Carol Jones knows the publishing industry and she knows how to throw a major convention--evidenced by the continued success of the RT BOOKreviews booklovers conventions!

Coming up April 28-May2, 2010 in Columbus , Ohio is the 27th annual Booklovers extravaganza!  Starting out as the only convention of its kind on the northern continent-perhaps the world--RT has grown over the years, grooming new authors, informing aspiring authors and connecting in a casual, buut professional setting publishers, editors and agent with authors and authors with readers, booksellers and librarians.

I am amazed at her skills, priviledged to call her a friend and giddy that she decided to stop into the House of Muse kitchen to answer your questions about the RT BOOKreviews booklovers convention!
So much goes into the planning of this event and though attendees see you darting hither skither duruing the convention, few may really know Jo Carol--the woman. Let's start there...

Well, I can tell you a little bit about myself and the role I play at the RT BOOKLOVERS Convention. I have been the acting Convention Director for the last 5 years. In that role, I help plan the convention, coordinate events and sponsors. Work on registrations, website and a few extra jobs:)

The convention has a staff of volunteers, if you see staff you are seeing a volunteer, not a paid employee of RT. They have been the mainstay of the convention. I started 10 years ago as a volunteer in Registration and worked behind the scenes for the first 5 years. My professional job was a Training Resource Specialist (coordinated, planned events for employees, computer training and computer labs) it helped prepare me for the RT world. Some would say there is no prep for the RT Vortex.

There are two groups that help me put this event together. The Convention Staff is made up of volunteers whose professionals lives are much different 360 days out of the year. (yes I said 360 days, I drag them to the site 5 days prior and work them to the bone).

The RT Staff works though out the entire year helping me to plan, create and organize the convention from the website to the workshops, from the pre-con writer programs to the booksigings and workshops--and everything in -between.

Both sets of these volunteers help on site. We couldn't do it without either of these groups. If you come to the convention please give these folks your thanks.


You might ask what does the registration cover, it covers the hotel fees, meals, decorations, audio visual, publicity and many other things. We have parties every night, a kick off with Ellora's Cave Fantasy Party on Wednesday, Faery Court Costume Ball and Dinner on Thursday, Heather Graham and Helen Rosburg Vampire Ball and Dinner on Friday, and the famous Dorchester Party on Saturday. There are more mixers from morning until evening every day. I'm always amazed at the sponsors and the creative events that they pull together!! You can finda complete list of all social and professional events at our convention website-RT Convention

Often during the month of December, I get requests asking if gift certificates are available for the convention. Husbands wanting to give a special gift to their aspiring author wives, daughters wanting to bring their mother to meet her favorite author, or a friend who wants to help his or her friend’s, dream of getting published a bit more of a reality because of the fantastic networking opportunities available at this convention.

When I started going to the convention it was to meet some of my favorite authors, so when I took the reins as director I began to expand the convention agenda to offer a broader range of networking among authors and readers. We designed a “Reader’s Track” as well as a track custom-designed for aspiring authors, published authors, booksellers/librarians, and, of course, some of the best publishers, agents and editors in the industry.


The Romantic Times BOOKlovers Convention offers just that—an array of events-social and educational for attendees to learn what’s hot in the publishing industry, find out about emerging markets and technical achievements. This year, we’ve added more interactive events between authors and readers and two bookfairs, where readers can peruse all the best of the e-published industry, as well as the print and audio portions of the industry.

This convention which began as primarily a romance conference and the only one of its kind on the Northern Continent—still holds roots firmly in the belief of the romance genre, but in recent years we’ve expanded to include other popular genres, as well as the blended genres. Paranormal, Erotica, Mystery, Thriller, Urban Fantasy, Sci-Fi/Fantasy, Historical, Contemporary, Series, Steampunk, YA/Teen, Psychic Fiction, Multi-Cultural, Comics/Manga, Vampire—to name a few, and RT prides itself on keeping an eye on what it is that readers want.


One of the perks for all attendees is getting to meet new authors and learn about new genres, upcoming trends, and have the opportunity to ask questions, and make your voice heard. Publishers and authors are very generous with baskets giveaways in Club RT(over 125 baskets were given away last year in Club RT!) and the booksignings, as well as an array of free items that are given away in RT’s well-stocked promotional hallway. Thanks to publishers, I love hearing the complaints from attendees about how they are going to ship all their free books back home! (We do offer shipping services onsite as well!)

If you are interested in reading the deets on the RT Convention, set for April 28-May 2, 2010 in Columbus Ohio—including how you can register for one of the best and largest reader events in the country! Come experience the Romantic BOOKLovers convention, we’d love to have you!


I’d love to hear if you’ve attended RT or who you would like to meet at RT? What’s your favorite type of read? If you have any questions about the convention, I’d be happy to answer those for you.

Today as a special holiday gift, House of Muse is giving away a $100.00 discount on one 2010 RT registration to one lucky reader who leaves a comment!! Winner announced on Friday afternoon, December 18, 2009. **You must be registered by midnight, January 15, 2010 to receive the discount.**

My thanks to Jo Carol for stopping by and if there are any questions you'd like to ask about the convention, Jo is here in a RARE one-on-one appearance to try to do just that!