Part I; Unforgettable by Amanda McIntyre
*written for Build a Hero winner: Leontine


Aidian stared into the flames. It had been years, no, centuries since he'd felt her body beneath his. Her dark brown hair--a tumble of sensuous curls--splayed across his pillow, her smile teasing, taunting him. Even now, he grew hard to think of the scent of her skin, the taste of her lips. He swallowed, tamping down his frustration. She plagued his thoughts and haunted his dreams as she'd done for an eternity. And he had more of the same torture to look forward to.

He'd immigrated to the Carpathian mountain region with his Celt parents when he was only a boy. It was in the deep, dark wood on a day meant for adolescent fun and adventure that would change who he was—forever. Never go into the woods alone, his mother had cautioned. He should have listened. Upon entering the winding path, it was not long before he became disoriented. When a storm blew in, he searched for shelter finding the small cottage of a dark haired woman. She offered him a roof, a warm blanket for his shoulders and in a moment of passion took his virginity and made him immortal.

He never returned home, but drifted from place to place and-- tutored by the secret society of Carpathian vampyres-- he learned how to survive.

It was several centuries later, when he ran across the real estate ad in a newspaper advertising this cabin, set high in the wooded mountains of upstate New York. The closest town was five miles away, down a steep winding curve that few ventured on a good day, fewer still on a bad. No, this was his mountain and few knew about him up here. He liked it that way. On the full moon, during the time of feeding, he could travel back and forth through time, without being disturbed.

Restless, Aidian stood and stretched his arms over his head. It was a little over a week to the full moon. He always got this way. Maybe he'd go work out or run down to see Oscar, his tattoo guy. Oscar was brilliant, completely eccentric, and off the wall, making Aidian suspicious if the human canvas of ink art had dabbled too much at one time in something more serious than the Clove gum he chewed incessantly.

He was on a feed the night he found her…or rather, she'd found him.

He'd traveled back to Britannia, when the Celts still tended the land in reverence to Mother Earth.

The air sucked from his lungs as he raised his head. His eyes met hers. Unfortunately,what she saw was not  a clean kill and the subject had struggled. She stood still, frozen. The basket she was carrying, fell to the ground. A single apple rolled to his knee and he picked it up. For a moment, he stared at it, blinking several times to bring his eyes back to their natural color. He wiped his mouth with the back of his hand.

"Oh, by the goddess almighty, what evil thing have ye done?" she asked, her eyes wide, but not with fear.

Aidian stood, turning the fragrant fruit in his hand. "It's unfortunate that you came along when you did. In a few hours his body will be dust."

"Yer one of…them, then?" she asked looking up at him. "One of the night folk?"

Her tongue had a lilt that Aidian found titillating and he was curious to know what other skills it might possess. He shrugged, having just satiated his appetite, she was not in danger of becoming a meal. He licked his lips and eyed her voluptuous curves, she was however in great danger of winding up in his bed--and for a good long while if he had anything to say about it.

"You aren't afraid of me?" Aidian took a step toward her. His fingers curved around the apple, squeezing it gently, his gaze drifting a few inches below her chin.

She dropped to her knees, searching the ground frantically for something. He smiled. Unless she had a crucifix or long sword, maybe a stake nearby, it did not appear he was in eminent danger. Not that Aidian didn’t understand her concern--dead corpse notwithstanding, of course.

Without shoes, he stood six foot three, maybe four the last time he'd checked. His preferred clothing for a feed is black jeans, same color T-shirt and a well worn leather suit jacket—borrowed from a nice Italian fellow one evening in Paris, who wasn't going to need it anymore. Other than that, Aidian's eyes had returned to their natural teal blue color and his fangs retracted. He took another step closer, amused by her tenacious spirit. She had not screamed, not run at the sight of him hovering over a dead body. She knew what he was, and yet chose to remain.

"Stop, I say! Not another step closer, mind you. Ah, there 'tis." She grabbed for something behind her, scrambled to her feet, and shoved a long string of garlic in his face.

Aidian grimaced at its annoying and pungent odor, reticent to tell her that he'd traveled back in time to feed and that his body had over the years built up an immunity to garlic.

"Right." He frowned. "About that." Aidian scratched my chin, realizing he hadn't shaved this morning in his haste to feed.

She shook it violently, little wisps of garlic skin floated to the ground like snow.

"I don't think I've ever met anyone like you."

"Then I'd just soon keep it that way, if it matters not to you."

"What if I said I wouldn't hurt you?"

She laughed and eyed him, nodding to the dead man on the ground.

"I admit that may taint things, but in truth, my word is my honor." He held out the apple to her. "And you can put that away, it doesn't have an effect on me."

Her storm-filled eyes flicked from the garlic strand back to him.

There was a measure of fear in her eyes, but she was strong, this one. Her shoulders thrust back, chin held high, her focus squarely on him.

If she'd had a bow tied around her, she couldn't have been a greater gift to his weary soul.

She took the apple and lowered the garlic. Her breasts from his vantage point rose and fell gently as she tried to control her fear.

"I will not harm you, I swear." Aidian lifted a hand to her cheek, soft as a flower petal it was. Her beautiful eyes—the color of a lush forest—drifted shut, her cheek pressed into his palm. He smiled at how easily she surrendered to his power.

I want you in my bed this night. He spoke to her through his telepathy.

"Aye, milord, take me as you wish. I am yours," she spoke in her soft dream-like state.

It was far easier than he'd expected.

Her eyes looked up at him, and she gave him a sweet smile. Aidian took it as her invitation to begin their 'date,' and lowered his head to sample the mouth that had tempted him from the first moment he saw her.

She tipped her head and pinned him with a challenging look.

"Do you think that yer charm is enough to sweep me off my feet, dark one?"

"Dark one?" Aidian scoffed rearing back to look at her. His power over her hadn't worked? Damn and he was so close to scoring.

"Do I look like the type to go to bed with the first man that comes along?" She fisted her hands on her lovely hips.

Aidian glanced over his shoulder at the chap on the ground and made a tsking sound. "I sure hope not. They have laws against that where I come from."

She frowned and then looked him over, her gaze lingering in a couple of key spots along the way.

He blinked. "Why should you come home with me, you mean?" Aidian answered her question with one of his own.

"Aye, give me one good reason, why I should agree to let you take me to yer bed. Ye haven't told me yer given name."

"Aidian," he responded quickly. Her banter was doing strange things to him, arousing him.. It was a different style of foreplay, but he liked it.

"And milady can be assured that the one good thing I can offer you, will give you pleasure beyond your wildest dreams."

Her dark brow cocked. "A braggart are ye now?"

"Just the facts, ma'am," Aidian spoke in his best Jack Webb voice. She eyed me warily.

"And ye wouldn’t be trying any of that sucking malarkey on me now, would ye?"

"Not the kind you're thinking of, milady." He smiled taking her hand and let his lips linger on her delicate skin. "But I cannot lie and tell you that sucking will not be involved." Aidian felt the rapid rush of her pulse, signaling her arousal. Oh yes, they would be good together, he was growing more, and more convinced of it if the tightness in his jeans was any indication.

"All right then, just this once, then you'll be movin' on, I suspect." 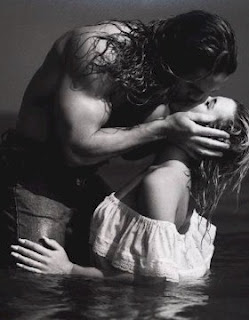 But Aidian didn't move on. He returned night after night, except during the feeding season, sharing her bed and her life. On more than one occasion, he pleaded with her to let him make her immortal, so that they could be together forever. She gave him her body freely, but to the rest, she would not relinquish.

Part II: Tuesday
*reprint not permitted except by author's consent.

Let me know if you're liking this free read? Question: What's your favorite era of vampire?
Amanda
at September 21, 2009