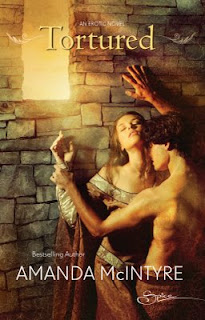 As many of you know I tend to write from the parts of history that I daresay, might better be left under the rug? Still, it is my thought that there are stories of romance, passion and courage even in the darkest of times. Perhaps even more so due to the fact that such things were fit only for dreamers of the time--even the affluent had their fear of war, betrayal, political gain, treason...

But as humans we all, no matter what our station, yearn for acceptance, of having someone who understands us, accepts us for who we are-what we've been through. The desire for passion can take on many forms in a person's life, but inherent, IMO to human nature, eventually we wish to be able to share that with another.

I have great admiration for those who survived the Dark Ages. No more of a struggle for human rights and freedom from suffering than is the case in some places today--TORTURED is a story of two people who have no reason to trust each other and yet know that to survive they must.

Their reasons for escape, become the passion between them and it is not long before that passion turns to flame. But while pleasures are satisfied, so begins the cautious realization that comes with learning to trust. Their realization that this passion masks something far greater...love.

“Dunna ever be afraid, Sierra,” her mother’s voice whispered in her head. “Fear will be your downfall, as it is mine.”

Sierra shoved her body against the dungeon’s heavy, wooden door. With the dense smoke from the executioner’s chamber still clogging her throat, she breathed deeply of the rain-soaked smell of earth and moss. The clouds above were gray and ominous, covering the sun and offering little hope of warmth in this most unholy of places. Her eyes rose to the hill overlooking the outer wall of the castle. Once occupied by the Romans, the fortress was now home to Britannia’s Saxon king, Lord Aeglech. Nine years ago, his tribes had taken over, obliterating all that was once a thriving Britannia. Those who did not accept the new Saxon rule were killed. Those who did became Saxon property. In some ways, Sierra considered herself lucky to be alive. She owed her life to her mother, and to the threat of a Druid curse that her mother left on Lord Aeglech and his guards in the moments just before she was hanged as a traitor.

More than once over the years, Sierra had wished she had not been allowed to live. Or that her mother had not left her with the gift of sight passed down on the maternal side of her family. She had never wanted the gift, seeing the life of servitude it had enslaved her mother to. Untrained, Sierra was not able to summon her sight at will, but over the years, she had managed to use it well enough to stay alive. And if she could stay alive, perhaps she had a chance of one day finding the brother who had been taken from her the night their mother died. If nothing else, living in the Saxon fortress had served to strengthen her in odd ways. No longer did she despise the sight of Lord Aeglech or look upon him as a murderous barbarian. Nor did the cries of anguish from Balrogan’s torture chamber—where she grew from a young girl to a woman—make her vomit, any longer.

For nine years, she’d lived in this Saxon hell, clinging to her mother’s last words, “Dunna fear.” It was her first and last thought each day. She had long ago learned to void herself of the things inside of her that could lead to fear. It was all she knew. It was how she survived.

Sierra choked on the cold air that filled her lungs. Blinking the wetness from her eyes, she squinted at the Saxon gallows up on the hill. Placed there for all the village slaves to see, it currently stood empty, gently blowing in the breeze and patiently awaiting its next guest. She absentmindedly touched the lavender wristlet on her arm. Her mother had given it to her once long ago.

Careful not to respond too quickly to her birth name, she glanced toward the nearby stable from whence the whisper came. There beneath the eave, with his arm braced above him, stood Cearl—her lord, her savior—the boy who started as friend and who’d now grown to a handsome man. The one and only boy she had ever given herself to. Sierra waited a heartbeat and checked around her before she hurried toward him. She gripped the water bucket as it slapped hard against her thigh, and let it tumble to the ground so she could leap into Cearl’s waiting arms.

“’Tis good to see you as well, Mouse.” He laughed and clamped his mouth down on hers. She savored his lips, the sharp taste of mead on his tongue, the feel of his arms secure around her. When she was with Cearl, the dark world she lived in faded away, if only for a few moments.

“Is Balrogan expecting you back soon?” he muttered, dropping her to her feet and wrestling with the knotted belt at her waist.

“I have a little time, not much,” Sierra replied and turned her head to allow his fervent kisses on her neck. In truth, Sierra did not know what Cearl saw in her. Sentenced to aid the executioner, as his apprentice, she was ordered to keep her hair short and wear men’s clothing. It was part of her punishment to have no identity, no gender. Yet Cearl did not seem to mind that she was covered in soot and filth.

“Take care when you call my birth name aloud,” she reminded him as his fingers fumbled with the leather knots of her belt. “It is dangerous out here. Someone might suspect that you are familiar with me.”

“Is it not true that I am?” He grinned and brought his mouth down hard on hers, before refocusing his efforts on his task. “What shall I call you, then? My wench?”

He laughed and grabbed her buttocks through the thin breeches she wore as he pulled her tight against him. Sierra knew they took a great risk. Lord Aeglech’s decree for himself and his guards was that no Saxon was to join with a Briton woman. He did not want the bloodline marred by a Celt bastard; if one of his guards disobeyed his rule, the woman would have to be killed. Though Cearl was not a guard, she feared what would happen to them if they were found out. “Your wench would imply that I serve only you,” she teased.

He stopped, his hands pressing into her upper arms as he studied her face. “Another is pleasing you, then?”

She cupped his unshaven jaw. Cearl was such an innocent. Though his body was that of a man, he often thought like a young boy. “Nay, Cearl, only you do that.”

“All right then, let it remain so.”

He gave her a smile before he captured her mouth. She knew the routine well, and she accepted the rough manner of his tongue delving between her lips. Sierra’s breasts tingled beneath her bindings, and she longed to remove them so she could again feel Cearl’s hands on her naked flesh, but today there was not enough time. She felt safe around him. In all the years of her imprisonment, she had never had reason to fear him. Cearl had not the rules of the other men in her life. He had no need to dominate, perhaps because his place in life was to serve those of higher rank. He was the handsome son of a Saxon villager and helped in the kitchen, in addition to crafting the drums the Saxons used in battle. His hair was a mass of golden curls, the color of the summer sun, and his blue eyes danced with mischief when he was aroused. His smile was the only bright spot in Sierra’s dreary existence.
at June 13, 2009